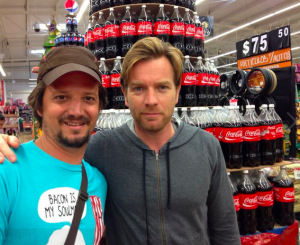 Actor Ewan McGregor at the local supermarket in Tulum

Tulum has been increasingly becoming the hot spot for fashion models and other celebrities who want to spend a relaxed holiday away from the crowds of fans.

Tulum still offers them a somehow safe haven, where they can mingle with tourists and locals without being overwhelmed by people asking for autographs. However, considering the popularity growth of Tulum, and the amount of celebrities hitting its beach, most likely in the coming years there will be more paparazzi and autograph hunters.

Everything probably started with Nicolás Maleville, an ex Burberry fashion model who built his beach house at Tulum. He invited colleagues like Giselle Bundchen and Kate Moss to his nicely built stone and wooden house on the beach road to Boca Paila. Eventually, his beach house became the small boutique hotel Coqui Coqui.

Last week (December 2012 holidays) Demi Moore was seen around partying in different places after she broke with Ashton Kutcher. She stayed at the “bikini bootcamp” of the Amansala hotel (a frequent getaway spot for NYC models), but visited as many places and parties as she could (she had dinner at Posada Margherita and El Tábano, 50% percent of tourists in town claiming they had either danced or talked to Demi). Also, Moulin Rouge star Ewan McGregor was in town, with a lower profile, he spent more time at the supermarket (picture) than at parties (he stayed at a private house at the Sian Ka’an reserve).