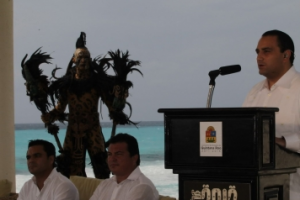 The Tulum (Mexico) Airport project is back and actively pushed by the Quintana Roo’s (the Mexican State where Cancun, Playa del Carmen and Tulum are located) Roberto Borge Angulo.  He had just (June 13th, 2011) had a meeting with the head of the SCT, the Federal Government transport secretariat, Mr. Dionisio Pérez Jácome to claim for a renewed bidding process.  A former bidding process was declared “void” in May 2011 as according to the SCT none of the bidders complied with the technical requirements asked by the Federal Government.

Despite some people are suspicious the project could be a victim of a political struggle (the state is run by the PRI party, while the Federal Government is in the hands of the PAN party), the Tulum/Riviera Maya Airport project was sponsored by Juan Carlos Pereyra Escudero, a PRI state representative and supported unanimously by all the other parties in the Quintana Roo state, including the PAN.